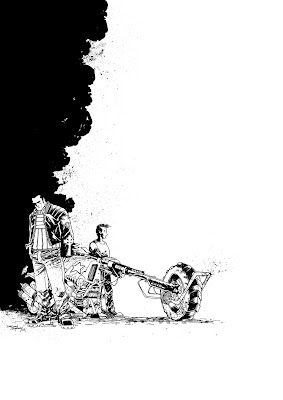 Howdy. Just put up the original layout for this piece on the Micks blog, but sure i might as well put the finished version up here while i'm at it. I made the main character a bit bigger than planned in the layout; a suggestion of Thompson's if i recall correctly. The two characters are from a planned graphic novel by a mate o' mine, so it's ultimately a bit of a fan pic, really. The Dublin Con was supposed to be on this month but was rescheduled. Instead, us Micks are doing this.

Lovin the detailing dec, its good seeing the sketch you started with too! When is this dublin comic con, id love to hear more about it.

Hey man, It's supposed to be on in March sometime i think. I've updated the post; us Micks are throwing a signing/night out in a couple of weeks instead. Check it out... http://www.facebook.com/home.php#/event.php?eid=159739994353#wall_posts

cheers man. i went to look it up there and came across the most useless website ever, and its an offical one to!!

Nice! I'm really loving the composition of this one, the black smoke really sells it.

Lookin good,Decs And The City.

Nice touch with the black.And the motorcycle looks deadly,as well.

Luke; i can't take credit for the bike. My mate designed that too. Check out his version... it's saaaavage... http://seangordonmurphy.deviantart.com/art/PRJ-Pinup-90463809

Great piccie Deckard.... those stray wires you stuck on the bike wreck my tiny brain though

I know, but that makes me like 'em all the more!

That`s fecking great.Did you say yer man was working on a book with these characters?Any word on when it`s coming out?

I remember seeing his stuff in an issue of American Splendour.He`s grrrrrrrrrrreat,as the tiger says.

Hey Luke, sorry; forgot to reply to this.

Yeah, he has a GN planned, but it'll be a while before it comes out; he's DC exclusive at the moment. Actually; he was out on Saturday... i could have introduced you... sorry!