HALF PAST DANGER #2 VARIANT COVER 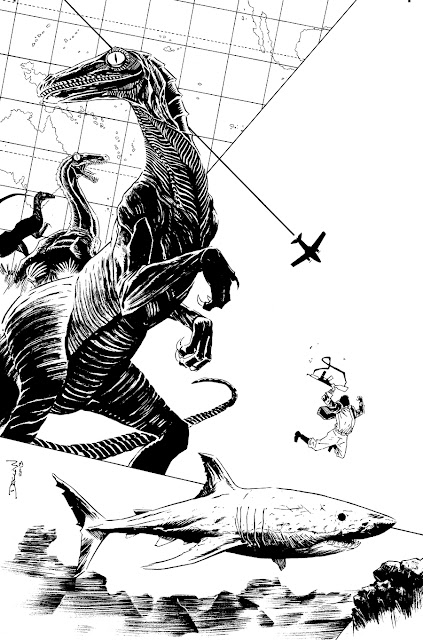 Yesterday on Twitter I unveiled the line art of my cover for Stephen Mooney's upcoming HALF PAST DANGER series from IDW. This cover is a variant for #2; in order to get this cover you HAVE to make sure you order it at your local comic book shop. It won't be otherwise available digitally or in print.

Was very flattered to be asked to contribute a cover to the series. It already has come fantastic variants illustrated by Tommy Lee Edwards and Nick Runge so to be included with those artists is quite an honour. I'm quite confident that series colourist Jordie Bellaire is going to make this cover shine in colour too.

I HIGHLY recommend you all keep an eye out for HALF PAST DANGER #1, which should be solicited any day now. It's an excellent high adventure series, in the vein of classic Spielberg. It's got Nazis, dinosaurs, feisty dames, one sharp-witted Irishman and the best work Stephen Mooney has produced in his already impressive career. In what's been a great year for creator owned comics, I really hope you all give this new series a try this May form IDW. For lots more on the series, including the variant cover I previously mentioned, be sure to see the progress-blog for the series at www.halfpastdanger.com

Labels: Covers, Half Past Danger, IDW

Wow. Guess I'm getting you a slightly better christmas present this year.