Eagle-eyed blog readers will have noticed by now that I've been contributing covers to Marvel's WINTER SOLDIER. The series was already a favourite of mine, and with issue 15 it was changing hands to the excellent creative team of Jason Latour and Nic Klein. Series Editor Lauren Sankovich contacted me about providing covers for the first arc by this new team. As fans of both creators (I was a huge fan of Jason's artwork, as well as his writing on LOOSE ENDS as well as Nic's phenomenal work on DANCER for Image) and a fan of the series in general, I was more than happy to be a part of this really dynamic creative team, in some small way.

As this is my first Marvel cover for a series I'm quite passionate about, I thought it appropriate to peel back the curtain a bit and take you through the process of creating the cover. 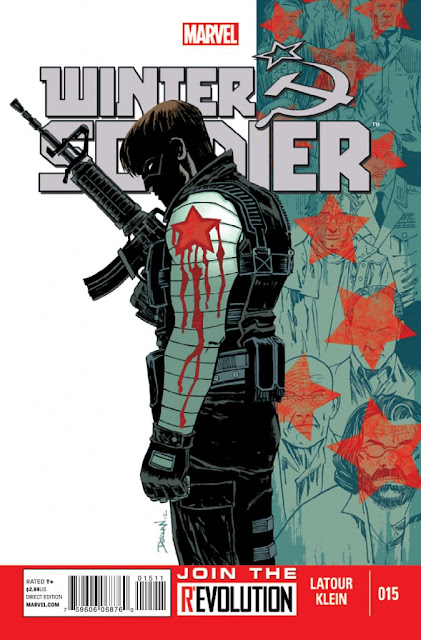 When I was working on the cover, Nic hadn't yet signed on to to the book, so I discussed cover concepts with our editor and Jason too. Two elements I was determined to use was the red star associated with Winter Solder, as I thought it was a really strong graphic element that could help make the series covers distinct. For the same reason, I also wanted to keep a limited colour scheme for the series of covers. Thankfully, the editor liked the graphic/conceptual covers I had doing in the past months for other publishers, and Jason has a great eye of design anyway, so my approach was encouraged by the team.

Below are the four strongest cover concepts I had for the first issue. I had more, but I will generally pick the ideas I think are the worst, eliminate them and hand in the best ones. I've found it helpful as in the past, editors can end up picking the ideas you hate the most (though not on this book), so this way, I eliminate the ideas I think are the worst, and never end up working on an idea I'm personally unhappy with. That way, no matter which idea is picked, I'm still happy to work on it. 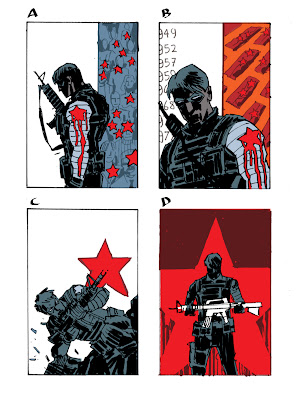 I handed in these ideas in colour, to help show the unified approach I mentioned earlier. I was working from Jason's overall plot pitch for the series, so while I had no story specifics of this issue to work from, I did have some overall themes and ideas for the series. One strong element to the series was Winter Soldier having to deal with his murderous past, so I honed in on that idea. Winter soldier has had a more Captain America-star emblem on his shoulder in Ed Brubaker's recent run, but I wanted to feature his old Winter Soldier Communist-inspired star to represent his past/guilt. For the rest of the covers, I've illustrated a contemporary Bucky, but have kept the star red. Of the four concepts, I was most happy with version A and C. Everyone liked the idea of the star bleeding; really pushing the blood-on-his-hands idea, and the red of the star connecting both Bucky and his past victims, so we went with version A. 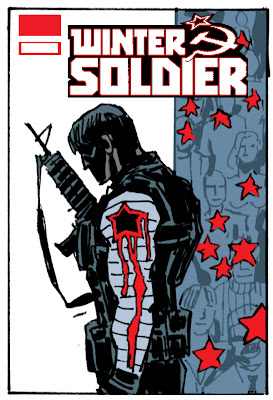 It turned out Jason was playing the idea with changing Bucky's star for this new direction, as it marked a new period in Bucky's life so we toyed with a black-star on red and other variations. We went with that idea; I needed the red to make the blood work but we could always change it down the line. I made a mock up of the cover to make sure everything would fit together in the final image (above)

I got to work with Jordie on colours on these covers, and it was pretty cool to bounce stuff back-and-forth with her. She suggested with the background victims, I should just draw them all fully, and she could make a star 'stamp' in photoshop. She could then have more options with placement. I've found I get the best results with Jordie when I give her the space to contribute to the image more. The more Jordie contributes to an image, the better the end result is. Anyone who has seen the covers for Image's COMEBACK series will see this too. 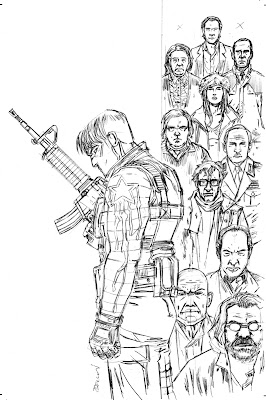 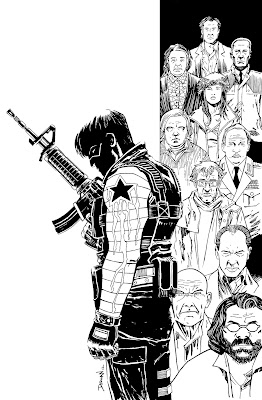 The pencils and inks for the cover. I was on a real Cold War era buzz wile working on these, so for the background victims, I based them all on characters from Florian Henckel von Donnersmarck's 'The Lives Of Others', a German film set in that time period. 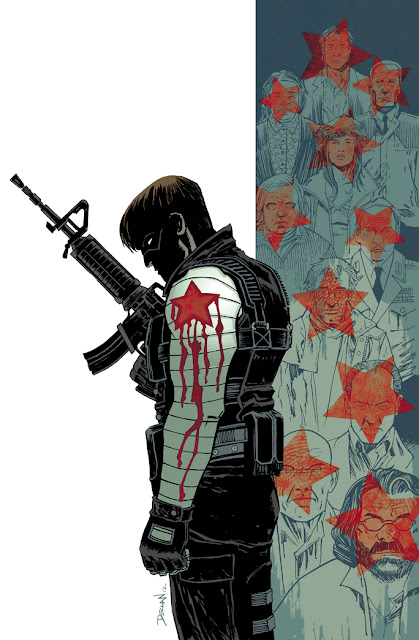 I think it was Lauren Sankovich, the editor, who suggested that the red stars would be best placed as head-shots, rather than various bullet wounds. I think it was a smart idea, as while my original concept had more shots, the bigger stars as head-shots communicates the idea more efficiently. Jordie added her usual magic and managed to make the star-shots clear, but also keep my drawing visible. Was really impressed with that; I had expected them to be completely covered, but drew them in full to give Jordie more options. She thought the black star wasn't working, so made it red and I think it was the right call. Keeping the star one colour pulls the eye in more, I think. Jordie did a great job; she ended up adding more colours that the extremely limited colour palette I originally had in mind, but with that, she also added a lot more sophistication to each cover, kept the palette as limited as possible and still unified the look of all the covers to this arc; she has done outstanding work. 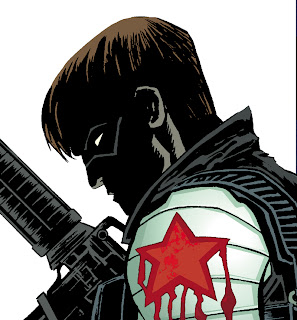 Here's a detail. I really love the metallic sheen on the shoulder; really makes the star pop too. Managed to separate the star subtly too.

There were some final collaboration and tweaking to the final printed cover; both myself and Jason wanted to keep the Winter Soldier logo one solid colour. In the previous issues, there was a metallic sheen over the logo and while it looked great, we thought it clashed with the more restrained, propaganda-poster feel we were going for. If I recall, Jason and I wanted a red logo, but Jordie and Lauren wanted a grey colour. As you can see, the ladies won, and I can see why; it looks great. Afterwards I was told that Marvel were bringing in a new design element to their Marvel Now line, but thankfully there was enough negative space in the cover to accommodate that.

Well, that's it. Thanks to Lauren, Jason and Jordie for making my first Marvel cover such a rewarding experience. Make sure you go and pick up WINTER SOLDIER #15, OUT TODAY!

Posted by Declan Shalvey at 2:00 PM