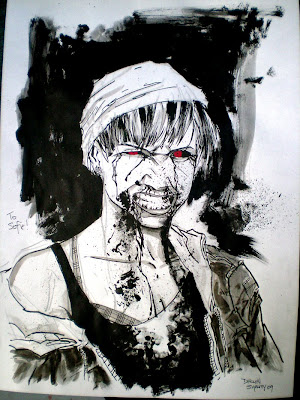 A sketch i did during my few days off in London. 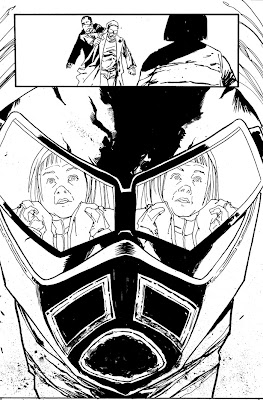 My monthly '28 Words Later' interviews with David O' Leary from Comic Related continue, this month talking about 28 Days Later #3 . Check it out here. (Here's the page you wanted to see Jamie).

Off to London for a few days. Catch youze alls laters. Some of you may remember I've been working on a Sweeney Todd graphic novel adaptation for quite a while. Well, I've made some headway on the book in the last couple of weeks. About bloody time. Here's some panels from a recent page. 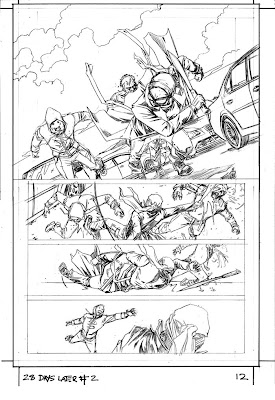 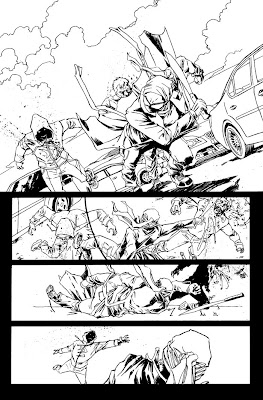 Here's a page (pencils and inks) from #2 of 28 Days Later. I'll show some stuff from #3 soon, but i just wanted to show one more page from the previous issue first.

I remember finding the layouts for this page pretty tricky but was pretty pleased with the end result.

I heard #3 has sold out already. What a crazy, crazy world we all live in.

In the states that is. Tomorrow in the UK/ Ireland. 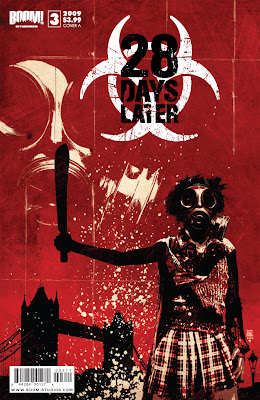 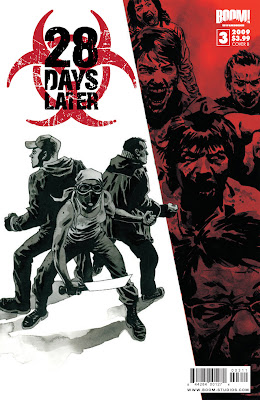 Above covers by Tim Bradstreet and Sean Phillips.

Greetings to all. The first few pages of #3 of 28 Days Later went online this weekend on CBR. First 3 pages below, but see more and the spiffy covers here 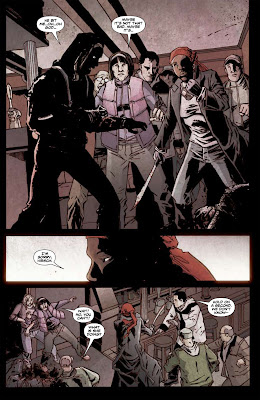 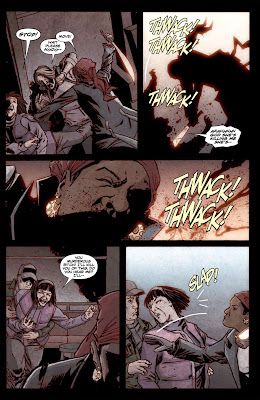 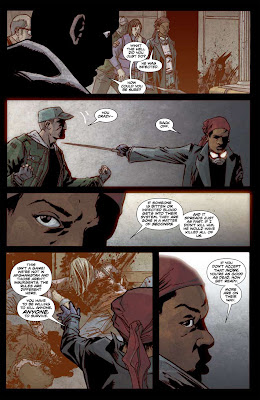 Strangely enough, the most requested sketch of my weekend at BICS was not Infected/ zombie-like characters, but was in fact Iron Fist. I had a folder of Eclectic Micks sketches, one of which being this Iron Fist that everyone likes, so i reckon that's why i got so many requests for auld Danny Rand.

This is probably my favourite one. 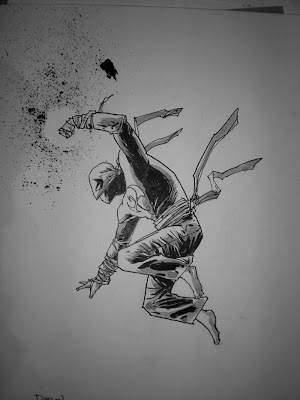 I made a stupid, stupid mistake with this one and drew him with two flowing hands instead of one.
He's not Iron Fists Dec ....you idiot! 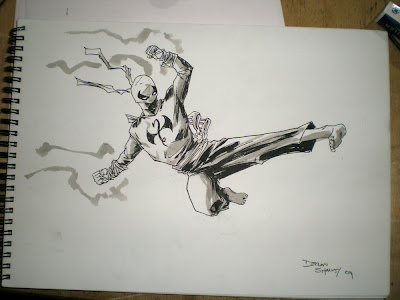 And finally a really loose and rough sketch.
This was the very last one of the weekend, so was a little more rushed, and i was at my most tired.
Sue me. 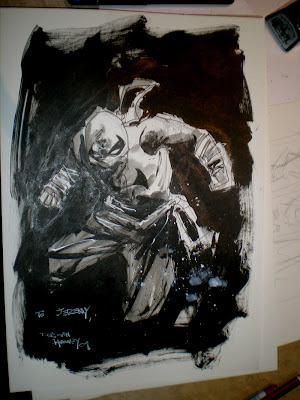 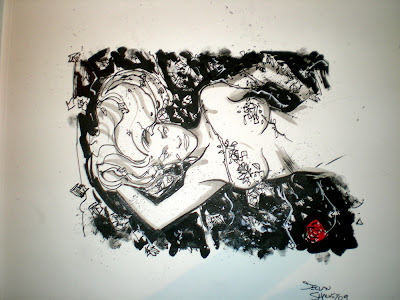 An Infected. The only one i drew all weekend, which was surprising. 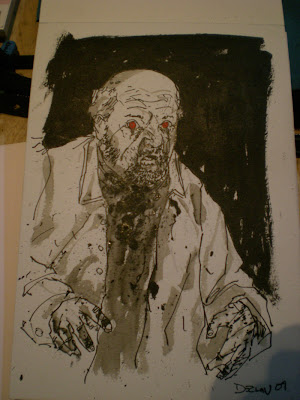 And an old reliable; Batman. 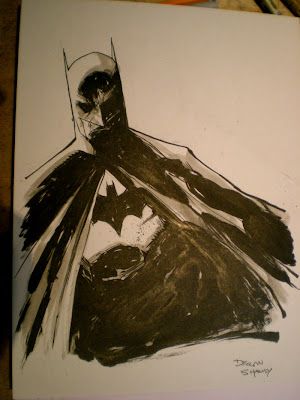 Back today from the British International Comics Show (BICS) and have to say, i had a brilliant time. So very, very tired now though. Sold a good few Eclectic Micks sketchbooks and did a lot of sketches. I charged for the first time ever, but i'm kinda glad i did, as i put a lot of work into the sketches and was so tired by the end of the day. Having a bit money in my pocket by the end eased the pain. 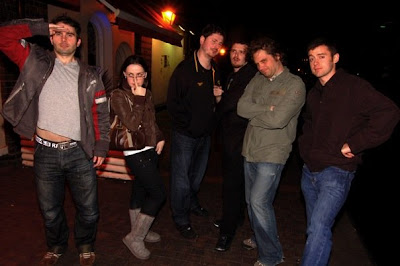 So, i would just like to say thanks to all who stopped by the Eclectic Micks table, got a sketch, bought a book, and to everyone who came up to me and said nice things about my work on 28 Days Later. It was very surprising and even more so appreciated.

Above is a photo from the launch party (borrowed from Martin Tierney's Facebook album) with the following Vogue-ing it all up; IDW's ANGEL; After The Fall artist Stephen Mooney, his lovely wife Jacintha, Image Comics' CHOKER writer Ben McCool, myself, DC editor Michael Wright and artist of Boom's FARSCAPE ongoing series Will Sliney

I took photos of nearly all the sketches i did. I'll post some in the next few days. First; here's some bunny-themed ones. Strange i ended up doing 3 bunny-type drawings. First, a sketch of Paul Grist's Mr. Floppsie Woppsie. 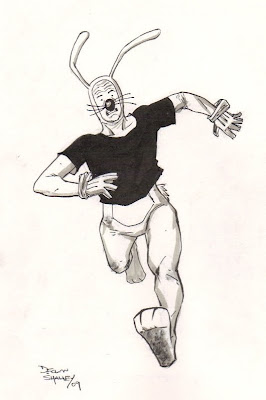 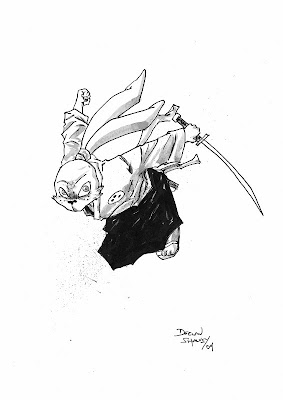 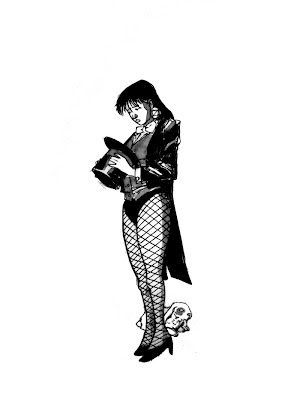 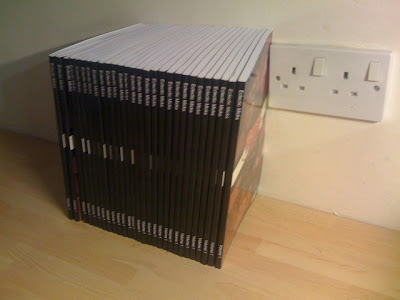 PS. I think i'll be charging (a little) for sketches this year, but if ye buy any of the above, i'll do one for free.
Posted by Declan Shalvey at 12:23 PM 2 comments: