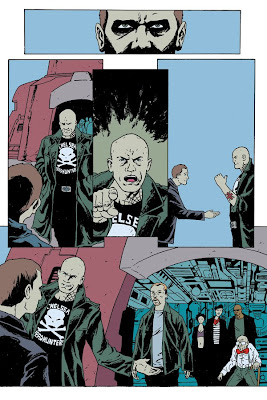 I've been inking Sweeney Todd all week with nothing scanned, so i thought i'd post an image from Tim Skinner that i've shown elsewhere. Writer Andy Winter has been steadily sending me the lettered pages and while i'm pretty happy with the art, the full impact doesn't hit without the letters. Andy's written some great jokes for this book. Can't wait for it to be out. I have to finish 3 pages next week in order for the book to be out in time for the Dublin City Comic Con in a few weeks.

Update: Should mention i'm doing a signing this Saturday in Sub-City comic shop on Exchequer Street in Dublin. I'll be there from 12 onwards. See ya there.... maybe. 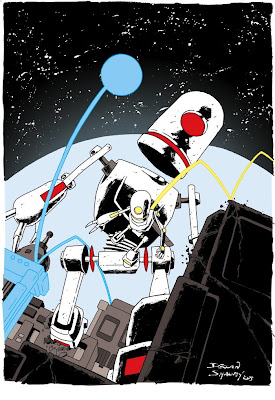 Recently finished a new poster for the Plain Sight video game. The crowd at Beatnik Games were looking for a poster to promote the game at this weeks Eurogamer Expo. 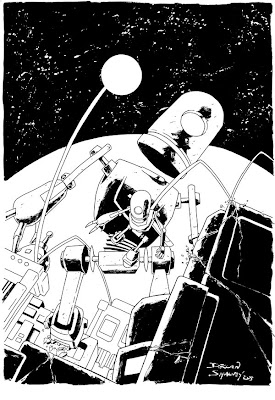 Here's the inks too. I moved away from the black/white/red colour scheme i had been using for this piece, as i saw some new footage of the game online (It looks great, take a look here) and thought it would be a shame to ignore the great look the game has. So in incorporated more of the game's landscape and varying colours, without actually duplicating it.

Here are the banners i did that didn't end up being used. I like the red one.

Did some more work for the good folks at Beatnik Games. This time i did some banners for their Plain Sight website. The banners change each day, so here's all the ones the website features. I'll post the couple they didn't use later in the week.

Good news everyone (said in Professor Farnsworth voice); it seems FRANKENSTEIN has been nominated for a CYBILS award.
CYBILS (Children’s and Young Adult Bloggers’) are Web awards for children's literature judged by a panel of 100 bloggers.
The 2008 Nominations for Graphic Novels (Young Adult) include the newly released Frankenstein. It's got some pretty stiff competition. In the same category are Classical Comics' A Christmas Carol, Jayne Eyre and Macbeth. Not only that, but the fantastic Y The Last Man, Cameron Stewart's The Apocalipstix and the absolutely stunning Three Shadows by Cyril Pedrosa are all up against old Frankie. Poor Frankie doesn't stand a chance!
A full list of nominations are available here. 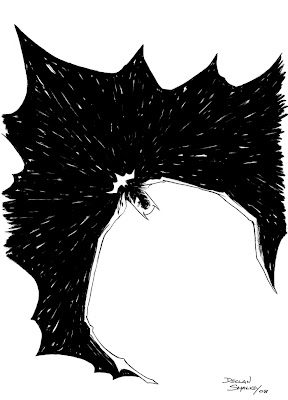 Was just about to post this Batman sketch i did a couple of days ago when i realised this is my 300th post on this blog.
Wow.
300.
I remember when i thought i'd be doing well if i made 30 posts. 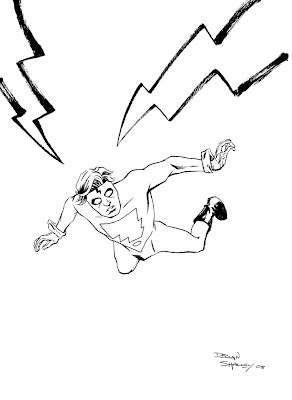 Here's another sketch i did last week. I'd never drawn Madman before. Not bad for a first try, i suppose.

Also, Ruth Crean, an old friend of mine from my Art College days just posted an interview we did on her blog. Check it out, there's a page from Frankenstein on it that i haven't posted anywhere else. When you're done reading that, make sure to look through Ruth's great online clothes shop. If only she made clothes for hunky guys like me.... 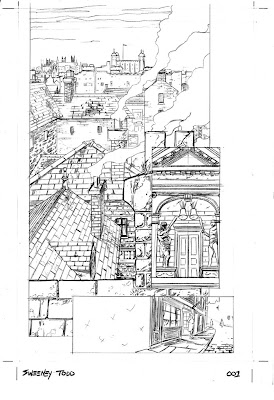 Here's the pencils to yesterday's post. Really worked hard on this page. Hopefully it shows..... 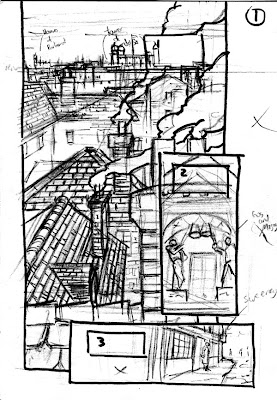 Sleeves are well rolled up and getting my hands dirty with Sweeney Todd now. Here's the layout i did for the very first page. One down, 139 to go.....

Also, the first review of Frankenstein is up at ComicBitsOnline.com. They've reviewed all the new Classical Comics titles and says some very nice things about all of them, Frankenstein included. 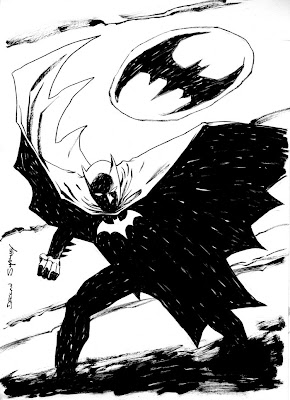 Did this sketch a few days ago. Everyone seems to like the Batman sketches i do, so i thought i'd post it.

Well, what can i say? I, as usual at Brum had an absolutely brilliant time. The highlight absolutely being seeing copies of FRANKENSTEIN in print. 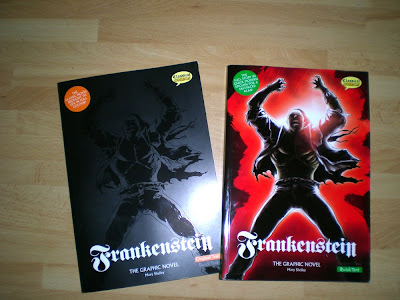 Both the Original and Quick text versions of FRANKENSTEIN

Not only was Frankenstein out for Birmingham, but so was A Christmas Carol with wonderful artwork by Mike Collins, and Jane Eyre with amazing painted artwork by John M Burns. I'm pleased to say that Frankenstein sold a little more than the other titles at Birmingham, so i hope that means it holds up a little to the other two fantastic books. 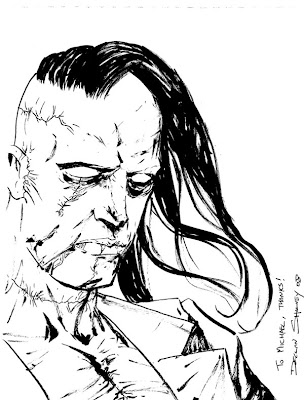 Thanks to Mick for scanning this Frankenstein sketch i did for him at Birmingham.


Birmingham is always great as i get to meet up with old mates, like David Baillie. I finally managed to get a copy of his brilliant Tongue Of The Dead hardcover collection. I also picked up some great books from Andi Watson, and Sean Phillips' Blow Up hardcover sketchbook. Thanks to Wade for the Daredevil scan.

Strangely enough, i didn't do that many sketches at Brum, not like i'm used to. Then again, i arrived late on Saturday due to the debauchery that occurred on the Friday night launch party. Still, i did some nice sketches, posted here by those who were kind enough to scan and e-mail them. It was great to catch up with mates, and have some decent conversations too, rather than the meet-and-greet that happens at a lot of cons. Seeing Leah Moore, John Reppion, Rufus Dayglo, Si Spurrier, Frazer Irving, Lee O' Connor and the like was, as always, a great pleasure. 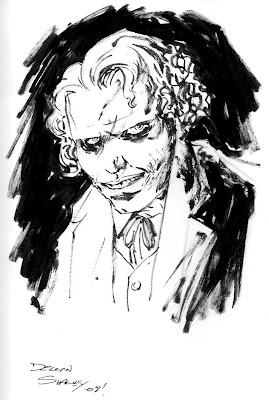 Thanks to Dave and Dan for the scan of this Joker sketch.

I'm also delighted that i managed to grab Andy Winter for dinner and talk all things Hero Killers and more importantly, Tim Skinner. Andy told me that he has nearly sold all existing copies of Hero Killers, and has no plans to reprint it. Rob Curley was also at the show. He told me he sold all of the copies of the new Freak Show that he brought. 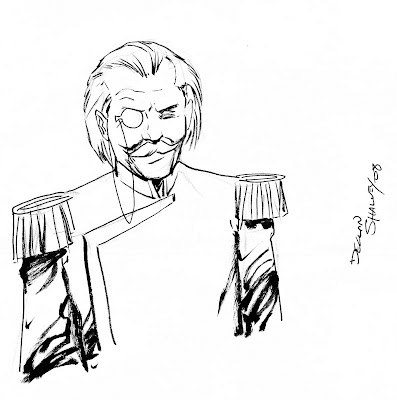 Thanks to Luke for the Director sketch.

The unfortunate thing about doing a 'con report' is that i forget to mention half the people i talked to/ spent time with. Safe to say i had a great time, and an absolute highlight of my career so far was sitting at the Classical Comics table with all the team, including Kat Nicholson, Jason Cardy and Jason Cobley, signing many, many copies of a project we've all spent a hell of a lot of time on. I've looked at both text versions of the book, and they both turned out great. I was originally fearful that the more text-heavy version would be clunky as regards storytelling, but it reads really well. I'm delighted that certain story beats and pauses translated just the way i wanted them too. Without sounding full of myself, i think the finished Frankenstein book turned out great. I hope ye all check it out.

Huge thanks to James Hodgkins, Shane Chebsey and Andy Baker for organising such a brilliant show. Yet again. 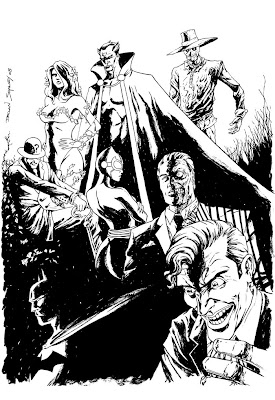 Hey all. I usually do a big long post about the convention i've just returned from, but i didn't really take any photos, so i'll spare any BICS talk til i get some convention sketches sent to me to illustrate the post. In the meantime, here's a 'Batman-and-Villains' Commission i just completed. Man, i love Batman. This was great fun to draw. Tough though.

ENOUGH WITH THE NIGHTWING AND CATWOMAN ALREADY 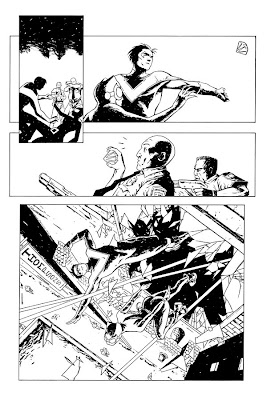 Yeah, yet another sample page. Enjoy.

Right, that's it from me for a few days. I'm off to the Birmingham International Comics Show in the morning for what looks to be a bloody great weekend for all involved.

Also, there's this Frankenstein book that'll be out at the con. You may have heard me mention it before.