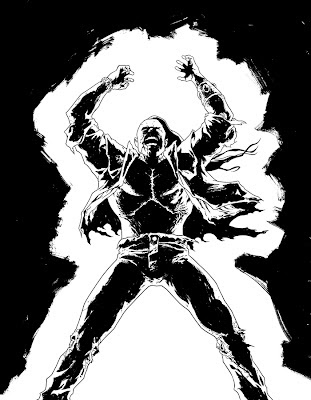 Coming to the end of Frankenstein now, so reckoned it was about time to get the finished cover done. The folks at Classical Comics really liked a pose i had used from a test page i did before i was actually hired for the project, and have used it for promotional purposes to date. I really wanted to do a new cover, as i think my drawing is at a better level now. Also, the monster drawn wasn't the finalized design so it was decided i should do a new cover, making it a reworking of the image they liked so much.

Anyone who i've been in contact with over e-mail over the last few years got a wierd e-mail form me last night. 'Apparently', i was stranded in Nigeria (of all places) and really needed people in my contact list to send me money. Now before you all say "Typical Declan; always begging off me over e-mail," it turns out it was not actually me at all! Some godshite got access to my email for about 20 minutes and spammed everyone in my contact list. A lot of friends responded with much humour, which is fine. But i'm pretty miffed that anyone whose address i have but maybe haven't used out of etiquette, got the before-mentioned e-mail, which angers and frustrated me to no end. Not very professional-looking on my part.

Then there were the folk who were concerned, like the honourable Steve Bunche. Check his blog to see his reaction (and to see the Shaft comparison if it's not obvious)

So, if anyone got that mail, rest assured i'm fine and my usual missionary work will continue, despite this recent worry. 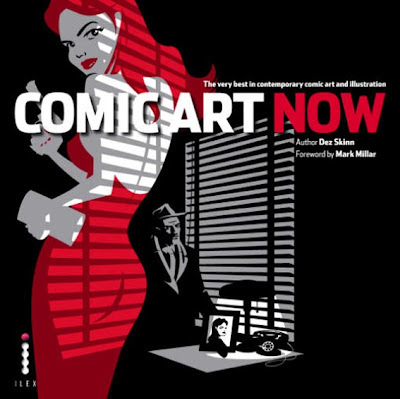 The end of the month sees the publication of a new 'coffee-table' book by Dez Skinn (author of Comix: The Underground Revolution, ex-editor of Comics International and Warrior) published by Ilex Press. Called Comic Art Now it aims to serve as a directory of some of the best of today's comic artists.

From Dez: "..It gives our industry something it’s long needed… an equivalent to The Creative Handbook, The Art Directory, etc and gives creators a general audience exposure and puts their names/email addresses in the hands of account execs and the like who invariably steal their styles because they don’t know how to find them. Uniquely, unlike the existing directories which charge for inclusion, this book’s selection for inclusion is based on the quality of the art rather than the artist’s bank balance.”

With an introduction my Mark Millar, it features the work of Alex Ross, Lew Stringer, Mike Ploog, John M. Burns, John McCrea. Oh yes ....and myself. It features a never before published Frankenstein page i did, that won't actually appear in the final book.

Really looking forward to seeing this book come out. I'm a sucker for 'artists books' so i'll get a great thrill from getting a book of that sort that i'm actually featured in, especially considering the amount of esteemed talent also in the book.

Published by Ilex Press (UK) and HarperCollins (US) the 10.5" hardback should be on sale on the 27th of March.

Hope ye all get a copy. 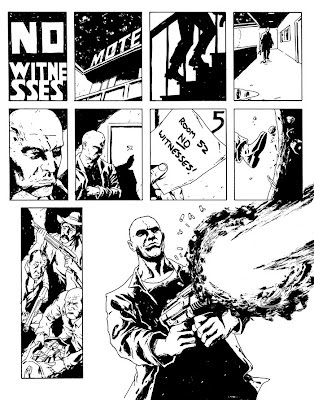 Was asked to do a 3 page story for the Tripwire annual by it's editor and all-round nice guy Joel Meadows. Thought i'd take the opportunity to do something set in modern day, with a crime element to it. Basically, have a go at a crime story. I love crime stories (hence my praise for Brubaker/Phillips' Criminal), but i've never actually drawn one. I also took the opportunity to make it a silent strip, inspired by Bob Byrne's achievement on his fantastic Mr. Amperduke. I tried to cram in as much story into the three pages as possible. Above is page one.

I should also mention that Joel's book Studio Space is available to order through Diamond. I can't wait for this to come out; it's got interviews with Brian Bolland, Frank Miller, Mike Mignola and the like. Make sure you order a copy! 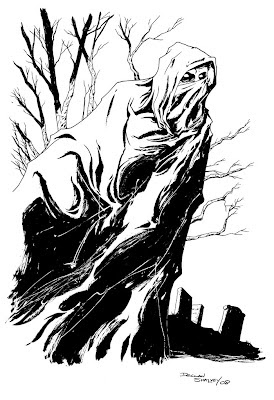 Here's a couple of illustrations i did this week for a new book by John Reppion (co-writer of Raise the Dead, Albion, etc.) about many ghost-stories centred around Liverpool. 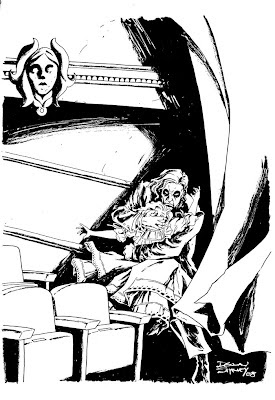 I understand lots o' folk have contributed, so i'm really curious as to how the finished product will turn out. More about the book...

'All kinds of authors with all sorts of approaches write for our Haunted series, from ghost walkers and Ghost Club and SPR members to those with a longstanding interest like John. I had come across his work in the past, and I was delighted when he got in touch and suggested compiling a Haunted Liverpool for us. The aim is to combine eye-witness accounts of encounters with the supernatural with the historical background and some famous - and less well known - stories from across Liverpool. There will be some really interesting cases, and all the places that you would expect to read about - and a few that you wouldn't. With John's background, I am looking forward to seeing the illustrations! 2008 is such an important year for Liverpool, and I look forward to working on the book with John. It will be available in June 2008 at a cost of £9.99, and I hope that we can help to make it the best and most comprehensive collection of paranormal encounters in Liverpool that has ever been published.' – Tempus Publishing’s Cate Ludlow

For more on Johns work, along with stories with his writing partner Leah Moore, go to www.moorereppion.com