Here's a cover i did recently; for issue 13. 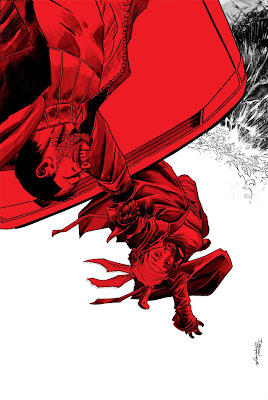 Really happy that i got to do a decent; design-y cover that still pertains to the interior story. It ended up being really close to my original layout, i think... 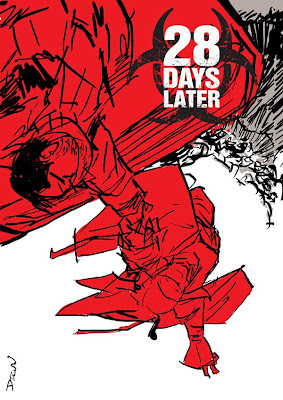 This is the first time i did my thumbnail/layout digitally and it turned out pretty well; i did mess around with it a lot; i had to be sure to leave one corner pretty bare so that the logo would be clear and readable, so there was a lot of selecting and moving the image around until i was happy with it. I think it was Mooney who suggested i do a wash on the 2 characters to separate them from the car bonnet. I threw in a bit of mis-registered halftone too, just to make it a little more interesting and also as i missed the chance to use that effect in the previous cover. 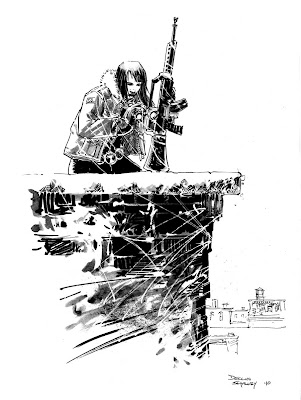 Here's a Black Widow sketch i did at the Albany comic con on Sunday. Thanks a million to Andrew Hanna for sending on this scan of it.

Posted by Declan Shalvey at 7:41 AM 6 comments:

Last weekend was C2E2 in Chicago; a con i was very much looking forward to attending. both myself and will Sliney flew out from out current abode in New York and had a bloody fantastic weekend. I got to meet a lot of my fellow contributors to the Comic Twart blog, and both myself and Will got to spend most of the weekend with the crew at BOOM! Studios. They were all absolutely lovely people and it was a pleasure to meet (and drink... and eat double-dish pizza with...) all of them.

The show was actually comfortably spacious in it's layout. Will and myself took a REALLY nerdy photo (which i'm sure he'll share soon) and i got some great sketchbooks from the likes of Chris samnee, Eric Canete and Guy Davis. 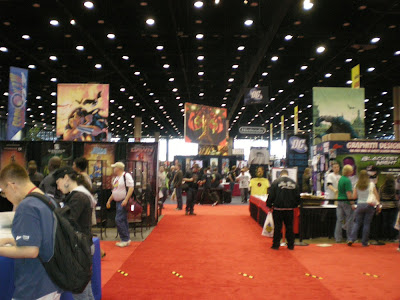 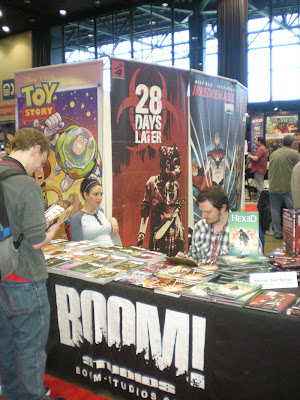 Above is a photo of myself sketching at the BOOM! booth with the lovely Jo; the boss' wife. Tried to get fresh with her but she was havin' none of it.

Below is a photo of myself and 28 Days Later writer Michael Alan Nelson. It was great to finally meet him and talk about what has happened in the book and what is coming (hope no one overheard us). We even got to work out an upcoming scene in a future issue; actually collaborating rather than me just taking a script and drawing it. Michael was such a lovely guy and it was an absolute pleasure to spend the weekend at the BOOM! booth with him. 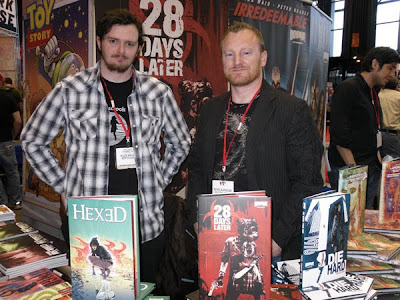 There was just too many happenings over the weekend for me to cover here, but safe to say i'd like to thank everyone who came to the BOOM! Studios panel and picked up a copy of 28 Days Later (I did a sketch in every copy), all the crew at BOOM! Studios for treating myself and Will so well, all the artists i met(Twartists included) who were so complimentary about my work (appreciate it so much), Mike Norton for dinner and a drive on Sunday evening and of course; the Samnees (Chris and Laura) for sharing a table with me for a spell. They soon learned to regret it.

Hello there; time for another process post on the auld Dec-blog... aw man, i totally should have called this 'The Dec-Blog'. Ah well. 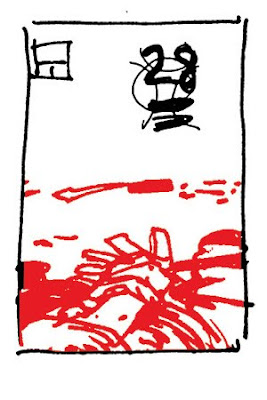 I was handing in cover ideas to my editor at BOOM! Studios, one of which being the above. Issue 12 called for a 'Someone WILL die' vibe, so i thought this would be the perfect chance to go with this (very rough) idea. I wanted to do a really bold, graphic, stylized cover... actually, i've been trying that approach with all the covers so far, but this was me trying to be a little braver in approach. 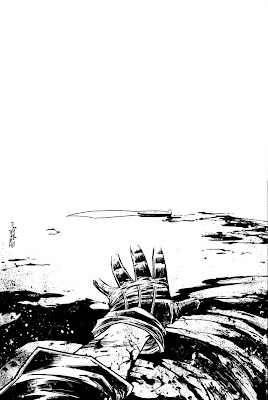 Here's the fully inked piece. from the layout you can tell i was planning on changing the black line art to red, but once i tried, it just didn't work. It didn't 'pop' like i wanted it do. If anything, it looked too flat. So with a bold composition, i tried a bold colour scheme.... 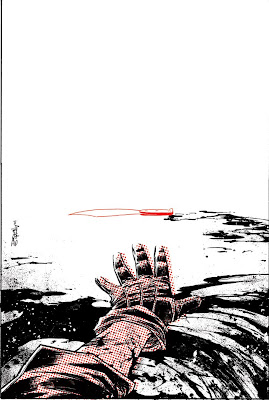 I showed it to a couple of the Micks for some feedback. It was suggested i colour the arm in the foreground with solid colour but i was pretty keen on going in this direction...

...except my editor wasn't as keen. He asked if i could colour it 'more traditionally,' which is fair enough. So, i had to try do that, yet keep it bold, otherwise what was the point of doing it in the first place? So, to keep it consistent with the previous covers (ie a black/white/grey/red colour scheme), i added greytone to Selena's arm, and coloured the blood in bold red... 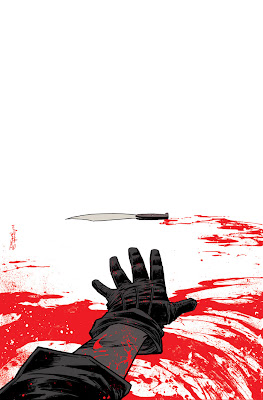 And here we have it; the final cover. I do still prefer the original colour version, but i do think this version totally works. I saw the cover online today, and was a bit surprised to see the 28 Days Later logo so big on the cover. Then again, it was a bold composition, and the logo looks big and bold, so as a cover, i think it really stands out. You can see it here.

So that is my heroic story. I got to say 'bold' a lot. Hope ye like the cover. I really do; to editorial's credit, i didn't think a cover this minimalistic would get approved; you can tell from a lot of comic covers that some editors thing you should fill a cover with lots of characters and lots of colour. Here i got to push my 'less is more' cover approach. That may be why this is my favourite of covers i've done so far.