Birmingham International Comics Show
As mentioned previously, i attended the latest comics show, this time in Birmingham, on the 9th and 10th of this month. Went over with my good mate Will Sliney (http://sliney.blogspot.com/). Had an absolutely great time, caught up with some old friends and made some more too. Here's some random photos from the weekend..... One of the convention halls Will, Guilia, Josef, Sandy and Michael Wright.
Good people one and all.
Thanks to all of the above for a great weekend, Especially James, who invited me in the first place. Roll on Birmingham 2007!
Dec.
Posted by Declan Shalvey at 7:26 PM No comments: 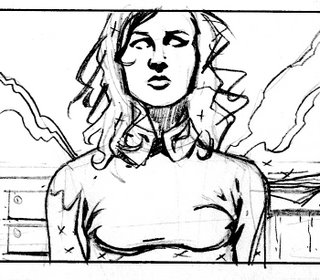 Dec.
Posted by Declan Shalvey at 4:40 PM No comments:

Yes, i'm alive! Had to take a little break for a couple of weeks after Birmingham, which i'm happy to report, i had an absolute blast at. I'll post some new work, and some Birmingham photos shortly. In the meantime, here's a couple of interviews Andy Winter and myself did about Hero Killers.

Also, a short story i illustrated came out during the week in Arcana's DARK HORRORS ANTHOLOGY. It's called 'La Famiglia'. Look out for it. I know i will!

Dec.
Posted by Declan Shalvey at 4:24 PM No comments:

Been looking forward to this for ages. Have a lot of friends to catch up with. I'll be signing at various tables, including the Moonface Press table and the Atomic Diner table, promoting both Hero Killers and Freak Show. Will tell tales of my adventures upon my return. You'll never know, maybe i'll see you there.

As mentioned beforehand, i'll be at the Birmingham International Comics Show this year, signing at various tables. Wanted to do another poster to show off a bit. Feels like ages since i've properly drawn a superhero, so i went with a Batman piece. If you were at the Dublin convention a couple of weeks ago, you may have seen me working on this. Here's the original art and the coloured version. Have versions of this as i was working on it, might post another 'process of a cover' next week. 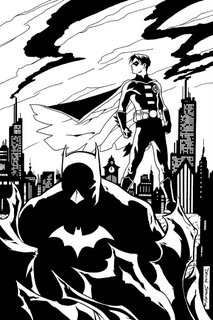 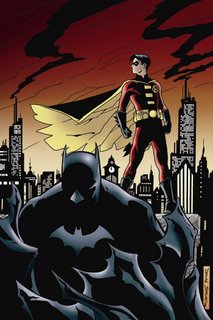 
Hello, me again. After gettin' Issue 2 of Freak Show done, i wanted to do a Freak Show poster. With Sean Philips and Stephen Mooney doing the covers, i wanted to play around and see what i could come up with. Keeping with how FS covers have been colloured previously, i decided to use duller tones, and not have any bright colours that would stand out too much. So here's the original art and the coloured version. 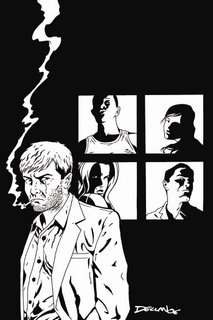 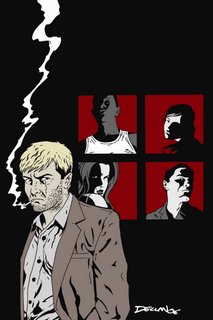 I like how there's no rendering, just flat, moody colour. I also went with colouring the background chatacters in greys, with a bloody-red behind them, keeping with the noir feel of the book.

This won't be a Freak Show cover, but it nice to have something i've done to sell it a bit, especially with the Birmingham convention on this weekend.

Dec.
Posted by Declan Shalvey at 1:58 PM No comments: