In a couple of weeks I will be attending the wonderful Thought Bubble festival for the second time. This time however, I won't have a table of my own. Instead, I will be signing and sketching from 1.50 to 3.20 on both Saturday and Sunday at signing table C. It will be first come, first serve so make sure you get there early. Hope to see you all there!

Dec.
Posted by Declan Shalvey at 2:56 PM No comments: 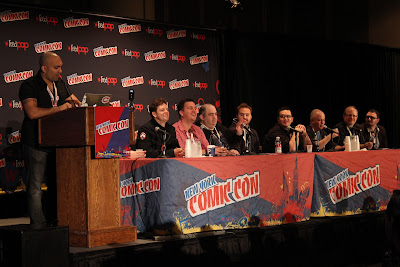 I previously mentioned that I was at New York Comic Con. It was quite the experience! So much so I thought I'd do a convention report much like I used to do back in the old days.

I arrived at the show on the Friday with an unfortunate case of hungover-itis, which didn't help with the overwhelming amount of fans at the show. The place was packed, which made Artist Alley (this year located in a north wing of the Javits Centre) an oasis of sanity 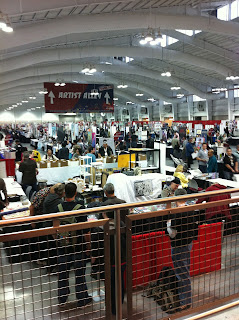 I was signing at the Marvel booth for about an hour in the main show hall. It was bloody crazy; it was near impossible to walk through the crowds; I have no idea how exhibitors and fans could manage a whole day of it. I could manage and hour then had to get the hell out of there. Thankfully, I was signing with good folks like Reilly Brown, Paolo Rivera and Frank Tieri, so that kept my sanity in check 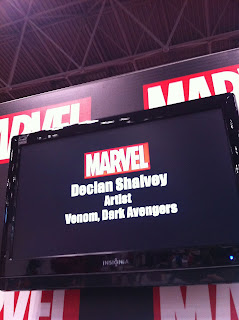 It was a relief to get back to artist alley where it was certainly quieter than the main show, but was still plenty busy. There was a lot of business happening there, but you could still take a breather and talk to fans and fellow pros. I got to chat with Rick remender and Deadpool writer Gerry Duggan who were sitting next to me, both really sound guys. I got a change to look around artist alley a good bit too, so got to meet/catch up with lots of friends including old roomies Ricardo Lopez Ortiz and Stacey Lee.

Saturday was even busier than Friday. Jordie came to the show with me and proceeded to completely disappear for most of the day! Everyone was looking for her and stealing her away from me all day. We took a brief walk into the main show hall and it was just unbearable for me. It was a pretty busy day of commissions so didn't get as much of a break. Met a great Winter Soldier cosplayer though; Gerry Duggan sent me this photo with him (with Winter Soldier editor Lauren Sankovich in the background). 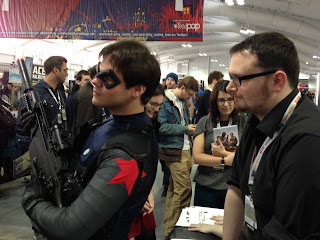 Winter Soldier and I. And Lauren Sankovich

Sunday was a bit of a change as I was on the Amazing Spider-Man Panel first thing in the morning where I quite publicly stole a dollar from Mark Waid. I'm depending on my ability to be forgetful as a way of getting away with it.. It was really weird to be up there with all those established pros... I was sitting next to Mark Waid for godsake! Moments like that really remind me of how lucky I've been over the last few years. Got to joke a bit and tease what's coming up in Venom. Got to meet Venom writer Cullen Bunn too and chat about what was coming up in pour next arc, and even got to suggest a few things, so I'm really looking froward to draw all that stuff.

Sunday was also the day Jordie was on two separate panels; the Image Comics- Female Creators Panel which you can listen to here and the Women Of Marvel Panel. Unfortunately, my Spidey panel was on at the same time as Jordie's Image one, so I missed it. I was delighted to see her on the Marvel one though. I was happy to see the panel was really well attended... 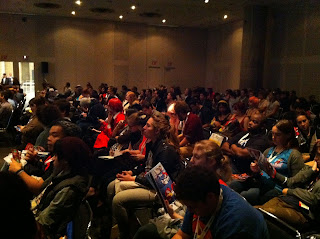 The Women of Marvel Panel was PACKED

It was a very interesting panel.  I really wish there wasn't a need for 'Women in Comics' panels as ideally, comics would be equally populated by both sexes but to this day it is totally skewed towards us guys. 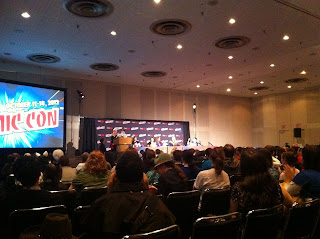 The panelists all briefly described how they all broke in though various means and moved quickly to questions from attendees and also twitter. While listening to all the questions it became clear that there were plenty of female fans at this panels who really appreciated that their voices were heard. 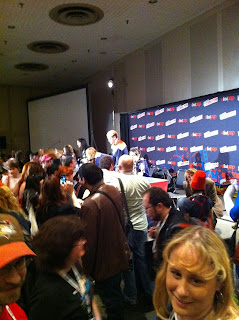 The panelists talking with fans once the panel had wrapped

Once it had wrapped; the panelists were swamped with one-on-one questions. It was really encouraging to see so much interest from female fans in female creators. I would argue that it is panel such as these Women In Marvel panels that invest in the female fanbase and will over time, develop into a more equal gender balance in the creation of comics.

The rest of Sunday consisted of brief hellos and goodbyes. The great thing about NYCC is you get to see so many friends over one weekend. the downside is that you rarely get to spend as much time with them all as you'd really like. 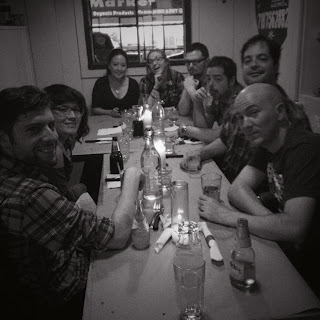 A perfect end to the weekend was pizza in Brooklyn with old friends.

NYCC 2012 was a fantastic weekend for me. Got to catch up with a lot of friends, return to the city that feels like a second home, and talk about some interesting future projects. Was particularly happy to see Jordie do so well at the show too. Between her panels, and her signing with Jonathan Hickman, and with the flood of people looking to meet her, It's amazing to see her career take off in such a big way in such a small space of time. Can't wait for NYCC 2013! 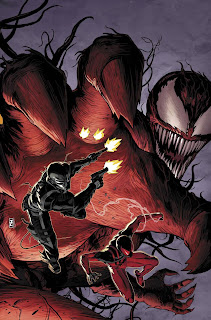 Back from NYCC! And what a fantastic time I had. Back to the studio now to get started on new projects. I see that VENOM #26 is out tomorrow. It's part 3 of Marvel's MINIMUM CARNAGE event and also my first issue with SIXTH GUN writer Cullen Bunn. Make sure you pick it up; it's full of sci-fi crazyness. You can see a fully coloured and lettered previer over at CBR.

Dec.
Posted by Declan Shalvey at 7:25 PM No comments:

It's that wonderful time of year; New York Comic Con is fast approaching; only days away in fact. If you're looking to get a commission, signatures, or just looking to say hello, just swing by table K2. Just look for the long que of people..... for Rick Remender, who's table is next to mine.

I'll also be signing at the Marvel booth from 1-2pm on Friday.

And be sure to check out the Spider-Man panel from 10:45-11:45 on Sunday, where I'll be on stage talking about Venom.

I'll be taking a limited amount of commissions at the show. I'm planning on only doing 8 commissions a day and I'm not taking any pre-orders, so make sure you get to me early to get on the commission list. Commissions will be $100 for 7.5 x 11' fully inked piece.

Hope to see you all at the show!

Dec.
Posted by Declan Shalvey at 7:30 PM No comments: