I'm sure by now you all know about the Eclectic Micks blog that's been running for a whole month as of today. Just in case you haven't been looking, may i encourage you to do so today. I've been hinting of working on 'a project' for the last while and today on the Micks blog i give the first proper indication of what the hell i've been teasing at. Go look. NOW.

Dec.
Posted by Declan Shalvey at 2:15 AM No comments: 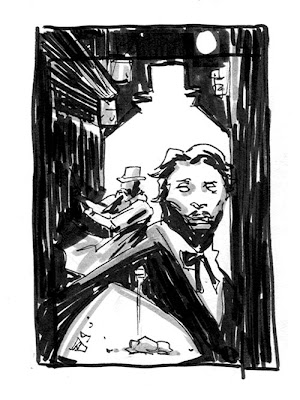 I dunno about you guys, but i love seeing layouts and thumbnails on artists' blogs. If ye don't want to see them, let me know and i'll stop posting them.

Anyhoo, this is a thumbnail to a cover i was asked to draw recently. I was given some elements to be included in the image and came up with the above. In the end, some changes had to be made so i had to come up with a whole new layout, but i quite liked this sketch as it is, so up on the blog it goes. What blog you ask...? This blog ......the one you're reading right now.

I'll post the finished piece once i get the okay. 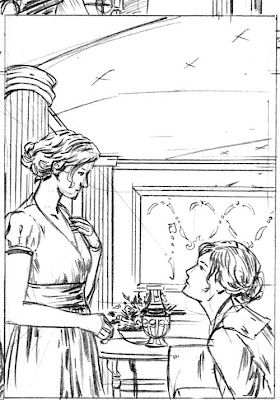 Man, if you told me years ago i'd be spending my days drawing elegant ladies talking in pretty dresses.... well..... i wouldn't have believed you. 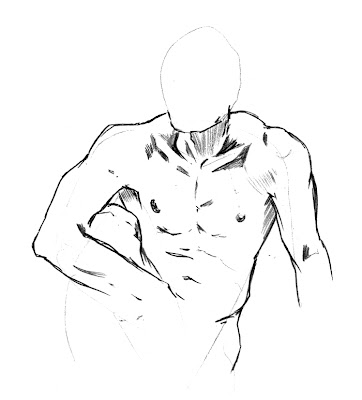 Did some more life drawing this week. Male model this time, so it gave me a chance to work on some areas that needed more study. This was supposed to be a quick, full-body sketch, but i found the shoulders and upper torso really interesting so concentrated on them while i had the chance. 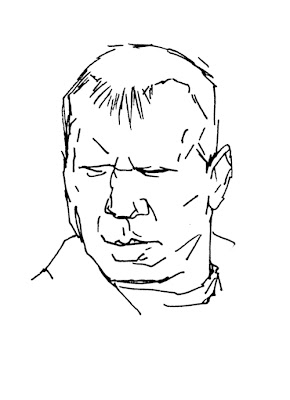 Don't have anything i can show online at the moment, so i perused my sketchbook to see if there was anything of note. worth posting. Found this sketch from a few months back. I vaguely remember seeing a photo of some gangster-type in the paper and thought he had a very distinctive face, so made a point of sketching him.

When drawing comics it's very easy to rely on 'default' faces, ie; faces you can draw out of your head all the time. Problem with that is they all end up looking the same, so it's worth sketching an unusual face from time to time. I do try and make various characters look distinct from each other but I don't think i do it enough, to be honest. I should really make it more of a habit to sketch different types of faces like this one.

Anyway, i quite like how this rough drawing came out, loose as it is. Thought i might do a grey-wash to make it look a bit more show-y for the blog, but to hell with it; sometimes a good doodle should just stay a good doodle. 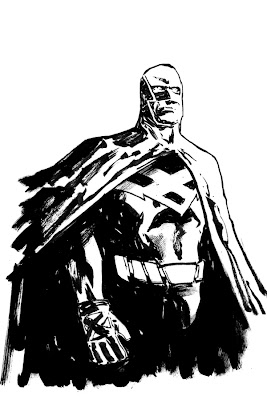 Allow me to blow your mind; Drawing comics ain't easy. Don't get me wrong, i love it, but there's so much work that goes into every page; a lot of it never gets seen. Still though, it needs to be done. Was working on a side-project recently, and though all is well so far with it, some things have been dropped from it. Case in point, this design for a superhero character. While working on the project things changed so this design for a Batman/Midnighter-esque character fell by the wayside. Still though, i liked this original concept sketch and thought the costume worked well so it was worth showing here. Shame i'll never get to actually draw it more but sure, what can you do? Them's the breaks.

First of all, i know i mentioned it a while back, but the Eclectic Micks blog really seems to be picking up pace. If ye haven't checked it out yet, ye really should. Every day. I've done a couple of nice pieces for it myself so far, but the other lads are really knockin' it out of the park.

In other Eclectic Micks news, 6 of the 7 Micks took part in a roundtable discussion a while back (It was literally at a round table, i swear... though it's not much of a discussion). What followed was a rambly, talk-over-each-other travesty of epic proportions brought to you by the Comic Cast. If you're in a mood to punish your brain, give it a listen here. 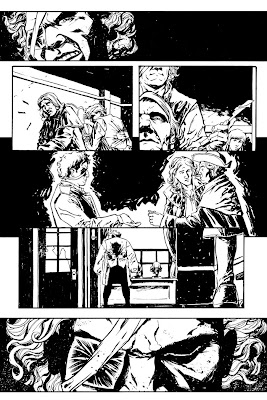 Here's the inks for page 52. The last post had my layouts for this. You can see how the actual composition of the finished page is nearly exactly as it is in the layouts. That's something i try make sure i do in order to keep the finished piece as spontaneous-looking as possible. Of course, the page will never be purely spontaneous as too much work goes into a page. First and foremost, you have to make sure the storytelling is clear, then try make the page visually interesting, make sure there's room for lettering, reference costumes and backgrounds, flesh everything out in pencil, establish a good and consistent light-source and then eventually ink the bloody thing. That's a lot of work in a page so it's very common for a lot of comic art to look overly laboured at times. I'm really hoping to have enough detail in my final pages yet keep them looking 'fresh' so sticking as close as possible to the original layout really helps me accomplish this. I think the somewhat more spontaneous way i've been inking of late helps too. Instead of doing really clean feathering (for example), i've tried to ramp up the atmosphere in pages by using a somewhat looser and instinctive inking approach.

I must admit, i'm particularly happy with how this page turned out. Hmmm. I'm starting to sound a bit full of myself. I'm sure i'll hate the page in a week. I usually do....

Hey all. Here follows info on this year's 2D Festival, but first, since this is an artblog (supposedly), here's the layouts i did for page 51 of Sweeney Todd. 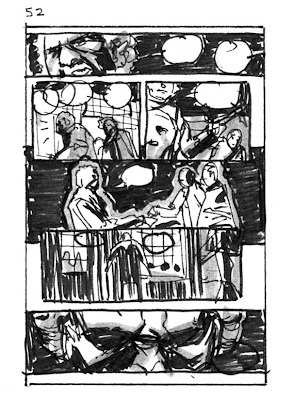 Phew! Right, now that that's over with, i've just confirmed i'll be appearing at this year's 2D Festival in Derry, this coming June. I had an absolutely great time last year and I'm really looking forward to this years. The guests appearing so far (with more to be confirmed i believe) are...

Unlike last year, i'm actually participating in a workshop. I believe it will be a Classical Comics orientated workshop with fellow CC veteran Mike Collins. There's plenty of information on the 2D Website, so give it a look. 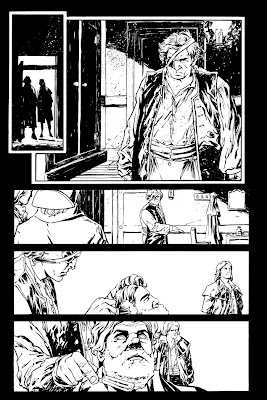 Here's another recent page from Sweeney Todd. Normally i spread out posts to show the layouts, pencils and then inks, but not this time. Straight to the good stuff.

Unless ye do wanna see the layouts/ pencils, etc. Just ask and i shall comply.

For who those who don't know, myself and some other Irish comic artists Stephen Thompson, Bob Byrne, Nick Roche, Will Sliney, PJ Holden and Stephen Mooney have set up a group sketch-blog.

Ages back, we all thought of doing a group sketchbook called Eclectic Micks (.....geddit?). A couple of pieces were done, but it seemed to fall by the wayside (i'm looking at YOU Mooney, Thompson, Roche....). Recent insanity has instead led us to start a sketch-blog. The blog is updated every day (seven days in a week, seven artists posting) with each artist posting an image on a certain day. I post on Tuesdays (today).

It should be a rule not to post a image on your own blog that's gonna be on the group one, but as an incentive to check it out, here's a few doodles i did to warm up for my weekly sketch. 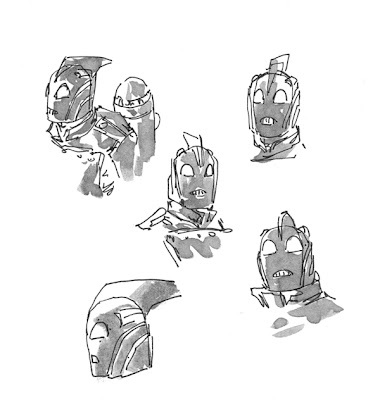 We plan on doing some 'theme' sketches in the near future, and hopefully will get to do the pieces we originally planned on having in the original sketchbook.

So, check out the Eclectic Micks blog here. It's already got over a weeks worth of images, many much better than mine. But don't stop reading this blog... i can't stress that enough. Business will continue as usual here, at your most favourite blog ever.

Here's two more drawings form the week's life drawing class. These two were from near the end of the class. They were longer poses, but because of where i sat there was less information to draw (first pose is mostly her back, second pose was mostly obstructed by the chair). Given the limitation, i decided to try and draw the pose in a couple of different mediums, instead of just using the technical pencil i had been depending on for most of the class. Got some interesting results. 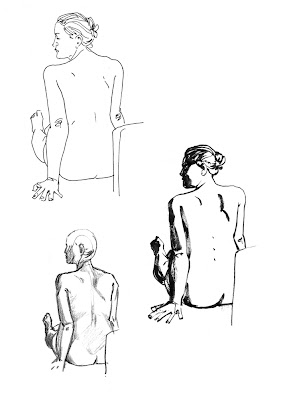 With the first pose, i concentrated just on line with the pen, then on basic shadow with the brush-pen and finally, having a good understanding of the pose, went in and emphasized all the subtle shadows. 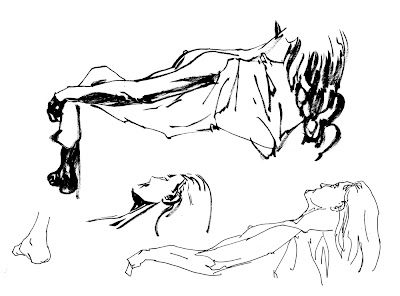 With the second pose, i first did a toned pencil drawing (not posted here), but feeling brave, i whipped out the brush-pen and did a much looser drawing, then did the same with a pen. Got some varied results which i all found interesting. Have to say, i really enjoyed the class and it pushed me to think a lot more about what i was drawing, which is really refreshing when you're used to drawing from your head all day, every day.

The very talented (and fragrant) Stephen Thompson and Lisa Jackson gave me the heads-up on some life drawing sessions during the week. Was delighted, as i've been hoping to do more life drawing; the last time i did some was back when i was in Scotland. I actually surprised myself; i was sure i'd be doing lots of quick pen-drawings (as i prefer sketching in pen), where in fact for the most part i ended up doing some refined, shaded drawings. 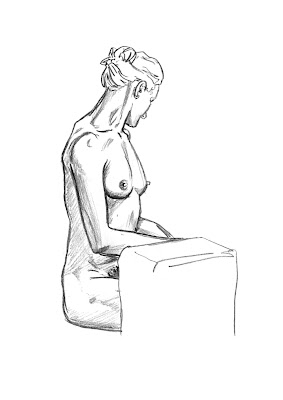 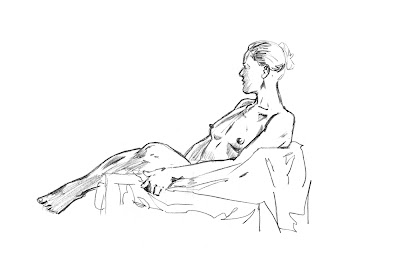 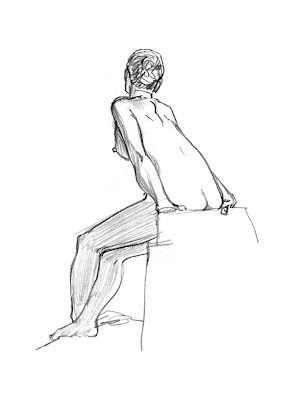 Also, was very flattered to get a cameo of sorts in Andrew and Chris Judge's DYSTOPIA. Thanks a million guys; nice one! The strip will appear in this month's issue of Totally Dublin. 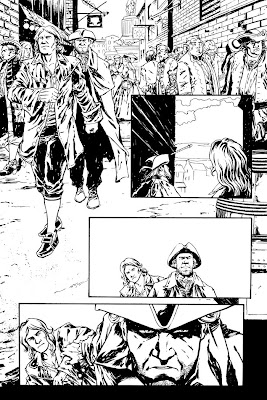 Here's the inks for page 50. Quite happy with the end result here. You can see that i fixed all the stuff that i mentioned was wrong with the pencils in my last post.

I've been using a pen-nib tool for the last few months and got some really nice and loose lines with it on this page (see background characters). Feel like i'm finally getting the hang of it. I also got some nice variation of lines with my brush-pen. I found that when i started using the brush pen, i did a LOT of drybrush. A month or so back, i seemed to barely use any dry-brush and started inking a lot more slickly. Nice to be able to do, but i'm not really interested in slick inking ('slinking'...?). I want messy pages, with lots of texture, so i'm trying to balance the 'slick' with some very gestural lines, and some splatter here and there. It seems to be balancing well in this page, and with most of the pages i've done this week.

Hopefully you all agree.