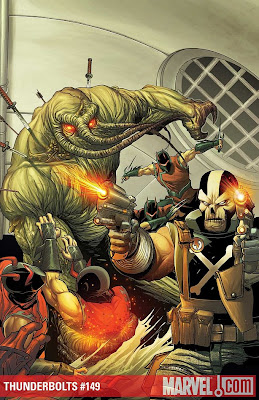 Solicits are now up for the second issue of my Thunderbolts issue, above cover by the colourist of the book Frank Martin Jr. If you want to get either issues, get onto your local comic shop straight away, cuz if they don't know people want it, then they won't order enough copies.

THUNDERBOLTS #149
Written by JEFF PARKER
Penciled by DECLAN SHALVEY
Cover by FRANK MARTIN
A SHADOWLAND TIE-IN! Luke Cage’s squad of fierce felons face the nature of true evil when they uncover secrets of the ancient order known as The Hand beneath Hell's Kitchen! Will a group of people rarely known for doing the right thing choose a higher path—or will they add to the power of the ninja cult? Meanwhile, as Cage fights to help his friend Daredevil up on the streets, he realizes that he picked a bad time to trust his skeleton crew of criminal operatives on an unsupervised mission! So come on, all you DD fans, pick up this issue and find out why Aint It Cool News raves: “very fun...I love this cast...this one is definitely going back on my pull list."
32 PGS./Rated T+ ...$2.99

Shit man, I went to the comic store the other day and realized they are at Thunderbolts #146 right now. That's BS I want 148 and 149 right now damn it!